Posted on April 25, 2019 by Collegian Publisher Leave a comment 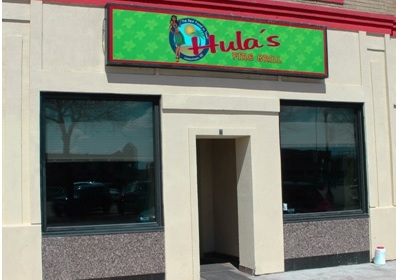 Jamestown, North Dakota is your typical Midwestern town, but recently a new restaurant opened its doors, bringing some island flavor to the city.

Hula’s Fire Grill opened its doors in February and has seen a steady flow of traffic from the surrounding community. The owners, Sandy and Jerry, both grew up in small Hawaiian towns. They recently celebrated their 47th wedding anniversary.

Sandy, the mastermind in the kitchen, derived most of the menu items from her great grandma’s recipes. Before a new item is added to the menu, Sandy will cook it for her employees, and it has to earn their approval to land on the menu.

“I am speechless when it comes to Sandy’s recipes. They remind me of home and the taste of the island,” said the manager Flo, when asked to describe Sandy’s cooking.

Sandy opened her first restaurant in Williston after moving to North Dakota with only 300 dollars. The Jamestown location is an offshoot of the successful Williston restaurant. Sandy and Jerry’s adopted niece Flo is now the manager of the new restaurant, and she considers it her pride and joy.

She was trained by Jerry and worked her way up from waitress to delivery driver to cook and finally, to manager in Jamestown. She can be found at the restaurant every day from 8:00 am to 11:30pm, making sure that everything is running smoothly.

“It’s starting to feel like home. I enjoy my employees’ company, they are family,” said Flo when asked about her time so far here in Jamestown.

The restaurant has a welcoming atmosphere, with an interior full of bright colors and delicious smells wafting from the kitchen. Their motto is “ohana” which means family, and it is clear to see that the employees behind Hula’s Fire Grill are just that- a family.

This site uses Akismet to reduce spam. Learn how your comment data is processed.